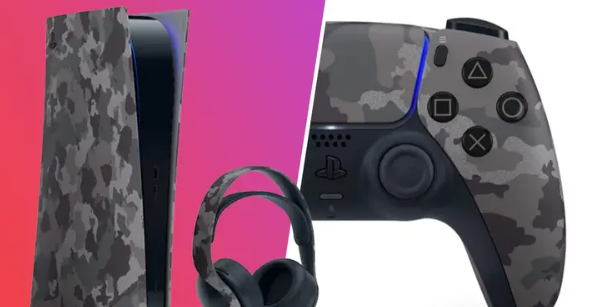 PlayStation today unveiled their latest cosmetic variant for the PS5: a beautiful new urban camo pattern for the DualSense controller, Pulse 3D wireless headphones, and the console itself.

Gray Camouflage is officially called this. It follows the previously available colours of Galactic Purple (Starlight Blue), Galactic Purple (Nova Pink), Cosmic Red (Cosmic Red), and my personal favorite, Midnight Black. Original White is also available. Is it me, or do there seem to be a lot more colors than we think?

This armed forces-inspired design may be the perfect solution for anyone still not tempted by PlayStation’s current catalog of shades and hues. It certainly has a Call of Duty or Battlefield charm, right? Or not. I’m not going to speak for you.

According to PlayStation Official Blog, the new console covers and DualSense are available from PlayStation starting October 14th. Pre-orders can be made beginning September 15th. Sony also confirmed that the accessories would be available at other retailers starting October 28th. However, the company did add that dates could vary.

The Pulse 3D headset will launch in December. This gives you ample reason to spend this holiday season. Camo and Christmas are synonymous. Now that I think about, they don’t.