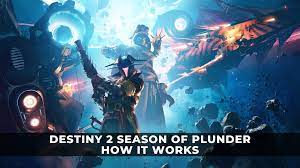 The Season of Plunder storyline in Destiny2 has focused on retrieving Darkness relics of Fallen pirates. Although we don’t know what these relics might be, they seem robust and ancient. There are a few clues: Eido mentions that a Vanguard report described the Fallen fighting over “rotting meat chunks,” while the Drifter claims they contain different body parts. What could they possibly be? These are just a few options.

The Shattered, the Body of Toland – Toland has not been seen in a while but was part of Eris Morn’s doomed fireteam. Toland, along with all the others, was defeated by Eris. However, Hive magic transformed him into a soul that could persist in the Ascendant Realm. His presence has been seen a few times to offer cryptic advice. The season’s Exotic weapon Delicate Tomb could also be referring to him. We don’t know his body’s significance, except that the Hive may have used it for rituals.

Parts Of Nezarec – We don’t know much about this vaguely sinister entity. He could have been a Disciple or Witness and may have been involved with the Collapse. According to the Drifter, he claimed to have seen the Fourth Tomb of Neozarec back in Forsaken. This would explain why the Darkness relics seem familiar to him.

Monolith Creatures/ Tormentors – Drifter’s familiarity and experience with Darkness relics may be due to an important event in his past when he encountered creatures which seemed to “shut down” Light on an icy world. These creatures are described as having “headless and ‘vacuous’ shadowy forms, which is consistent with the appearance of the Tormentor foes Lightfall.

Tanks – What would be so funny if the Darkness Relics contained only pieces of Tanks? He was reassembled for yet another boss battle at Season of Plunder’s end. Thanks was a zombie and a Cyborg, so why not a Frankenstein’s monster or a mummy? It’s possible!